Be Prepared: Sign up for Alert Rutherford to receive site specific all hazard and severe weather warning information. Have a NOAA all hazards & weather alert radio in your home or place of business as a backup. Make a plan and practice with your family or business associates. Pay attention and stay alert when watches are placed into effect. Have a plan, and be prepared to use it when the time comes.

In a house with a basement: Avoid windows. Get in the basement and under some kind of sturdy protection (heavy table or work bench), or cover yourself with a mattress or sleeping bag. Know where very heavy objects rest on the floor above (pianos, refrigerators, waterbeds, etc.) and do not go under them. They may fall down through a weakened floor and crush you. Head protection, such as a helmet, can offer some protection also.

In a house with no basement, a dorm, or an apartment: Avoid windows. Go to the lowest floor, small center room (like a bathroom or closet), under a stairwell, or in an interior hallway with no windows. Crouch as low as possible to the floor, facing down; and cover your head with your hands. A bath tub may offer a shell of partial protection. Even in an interior room, you should cover yourself with some sort of thick padding (mattress, blankets, etc.), to protect against falling debris in case the roof and ceiling fail. A helmet can offer some protection against head injury.

In an office building, hospital, nursing home or high rise building :Go directly to an enclosed, windowless area in the center of the building -- away from glass and on the lowest floor possible. Then, crouch down and cover your head. Interior stairwells are usually good places to take shelter, and if not crowded, allow you to get to a lower level quickly. Stay off the elevators; you could be trapped in them if the power is lost.

In a mobile home: Get out! Even if your home is tied down, it is not as safe as an underground shelter or permanent, sturdy building. Go to one of those shelters, or to a nearby permanent structure, using your tornado evacuation plan. Most tornadoes can destroy even tied-down mobile homes; and it is best not to play the low odds that yours will make it.

At school:Follow the drill! Go to the interior hall or room in an orderly way as you are told. Crouch low, head down, and protect the back of your head with your arms. Stay away from windows and large open rooms like gyms and auditoriums.

In a car or truck: Vehicles are extremely risky in a tornado. There is no safe option when caught in a tornado in a car, just slightly less-dangerous ones. If the tornado is visible, far away, and the traffic is light, you may be able to drive out of its path by moving at right angles to the tornado. Seek shelter in a sturdy building, or underground if possible. If you are caught by extreme winds or flying debris, park the car as quickly and safely as possible -- out of the traffic lanes. Stay in the car with the seat belt on. Put your head down below the windows; cover your head with your hands and a blanket, coat, or other cushion if possible. If you can safely get noticeably lower than the level of the roadway,leave your car and lie in that area, covering your head with your hands. Avoid seeking shelter under bridges, which can create deadly traffic hazards while offering little protection against flying debris.

In the open outdoors: If possible, seek shelter in a sturdy building. If not, lie flat and face-down on low ground, protecting the back of your head with your arms. Get as far away from trees and cars as you can; they may be blown onto you in a tornado.

In a shopping mall or large store: Do not panic. Watch for others. Move as quickly as possible to an interior bathroom, storage room or other small enclosed area, away from windows.

Keep your family together and wait for emergency personnel to arrive. Carefully render aid to those who are injured. Stay away from power lines and puddles with wires in them; they may still be carrying electricity! Watch your step to avoid broken glass, nails, and other sharp objects. Stay out of any heavily damaged houses or buildings; they could collapse at any time. Do not use matches or lighters, in case of leaking natural gas pipes or fuel tanks nearby. Remain calm and alert, and listen for information and instructions from emergency crews or local officials. Call 911 ONLY if you have an immediate life threatening situation!

A tornado is a violent windstorm characterized by a twisting, funnel-shaped cloud. The word "tornado" comes from the Spanish verb tornar, meaning "to turn."
It is spawned by a supercell thunderstorm and produced when cool air overrides a layer of warm air, forcing the warm air to rise rapidly. Tornados are sometimes associated with lightning and hail. Many tornadoes are the tail end of a mesocyclone and they have a characteristic "hook echo" signature on a radar screen.
The damage from a tornado is a result of the high wind velocity and wind-blown debris. Tornado winds range from a slow 40 mph at the low end to a possible 300 mph in the strongest storms. Tornado season in North America is typically March through August, although tornadoes can occur at any time of year. They tend to occur mostly in the afternoons and evenings: Over 80 % of all tornadoes strike between 5pm and midnight. They typically travel from a southwest to northeast direction. 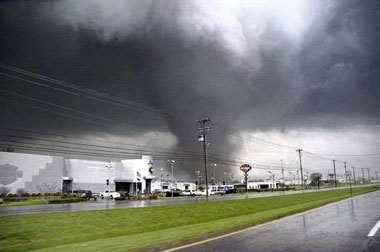 No two tornadoes look exactly alike. Nor have any two tornadoes behaved exactly the same. There are true incidents of tornadoes repeatedly hitting the same town several years in a row. But forecasting the exact position a tornado will strike at a certain time is nearly impossible. Also, anywhere that convection can occur, is a place where tornadoes can be formed.

Even though no two tornadoes are exactly alike, they always have the same general characteristics that classify them as tornadoes. First, a tornado is a microscale rotating area of wind. A thunderstorm can rotate, but that does not mean it is a tornado. Secondly, the vortex, rotating wind, must come from a convective cloud base. Some of those are thunderstorms embedded in squall lines, supercell thunderstorms, and also not to exclude the outer fringes of landfalling hurricanes. Third, a spinning vortex of air must have a wind speed above a certain rate to be classified by the Fujita scale as a tornado. 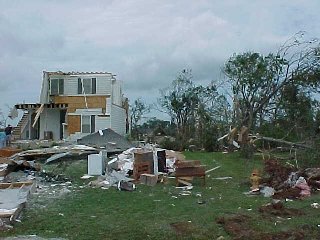 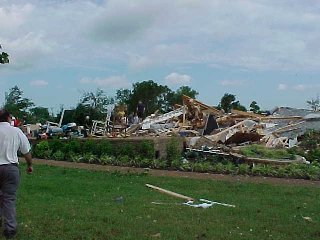